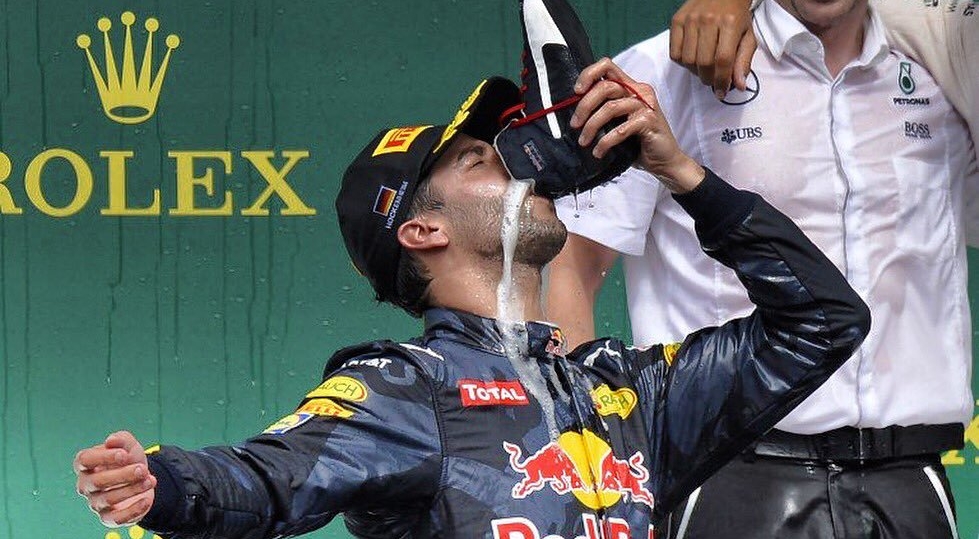 Australian Formula One driver Daniel Ricciardo has an odd tradition whenever he gains a victory.

He is renowned for taking a swill from his shoe, (doing a shoey), or helmet after a winning race. It’s a novel way to end a good day on the track and got us thinking about some of the other strange ways sporting stars celebrate a win.

The superstitions, traditions and rituals that accompany the sporting world are seemingly plenty and peculiar.

Nelson in cricket: Take the Nelson in cricket for example. The score 111 or multiples of, for some unknown reason are considered to be unlucky. Avoiding a bad outcome means raising a leg when the score strikes 111. The tradition gets its name from Lord Nelson, who lost an eye, arm and leg.

Toffee Lady of Everton: Every home game at English football club Everton, sees a girl dressed in blue walking the boundary of the pitch and tossing free mints into the crowd. A toffee shop that was near to the stadium is the reason for the tradition and it’s probably the sweetest we’ve heard of.

Stanley Cup beard: The National Hockey League can get pretty bushy, particularly when it comes to play-offs. The play-off beard tradition was bought to fruition by the New York Islanders in the 1980s, when players stop trimming their beards as soon as post-season begins. A shave can only happen if the team wins, or is kicked out of the Stanley Cup.

Don’t talk to the pitcher: In a game of baseball, talking to a pitcher who is pitching a good game is the worst thing you can do. If the going’s that good, why jinx his luck by distracting him with your words.

Cutting the net: The winner of the men’s premier college basketball (NCAA Division I) championship cuts the net around the hoop. Starting with the players and ending with the head coach, who keeps the last strand. It began when North Carolina State coach Everett Case tore up the net in 1947 as keepsakes in place of medals.